Beating the odds through hard work and determination led to Wayne Lloyd’s current career and personal success as one of the Harford County Electrical Apprenticeship program’s Year 1 instructors. He attributes much of what he’s accomplished to the four-year program at Harford Community College, where apprentices learn the electrical trade through on-the-job training under a licensed master electrician along with twice a week in-classroom instruction.

Wayne was born in Harford County but spent much of his childhood in Florida. Unfortunate family circumstances led to a series of issues with the law, homelessness and despair. By the age of 16, Wayne was just trying to survive and make ends meet on his own. He spent several years in and out of the correctional system, but in 2011, committed to making a better life for himself. Not only did he earn his GED while incarcerated, he also aced classes in shop and obtained college credentials. He authored two books, A Small Book of Thoughts and Julius Cloud, a Baltimore superhero comic. Education, determination, and hard work led Wayne out of a life of negative experiences and perilous obstacles, and he’s been on a path to success ever since.

His journey has not been without challenges and hurdles. Wayne’s career as an electrician and instructor began with a friend who helped him secure his first job at Key Systems in Baltimore. He began his classroom training with the Harford County Electrical Apprenticeship program, always seeking more challenges and committing himself to reading code books and studying beyond the assignments. After leaving that contractor and joining another, he finally landed a well-paying position at SOEP Networking and Communications Solutions. Wayne felt he had hit his mark and life was good. But COVID hit back in March of 2020, and he found himself temporarily unemployed. Fortunately, he landed back on his feet with a recently secured position at Infiniti Technologies.

Wayne’s true passion, however, is teaching. He feels many of his students can relate to him. They’re familiar with his previous struggles and are encouraged and inspired by his perseverance and subsequent success. Says Wayne, “I want my students to see that no matter how negative things are, you can succeed. I want to show them how an average guy from the ‘hood’ can be successful. I try to stress that, and I feel like my students connect with me.” Wayne believes that for every wrong place at the wrong time, there’s a right place at the right time. “Choosing your place is what’s most challenging,” he says.

His success as an instructor stems from his ability to talk to his students as colleagues; he loves that many of his students arrive early to class to chat with him beforehand. He tries to help them out with solutions to problems they encounter on the job. “The more people I can help be successful, the more I feel successful. I show them if you apply yourself, plan your career and stay on the path, you can succeed.” They also know Wayne has walked in their shoes as an apprentice in the program and can relate to their challenges, like juggling work, school, kids, and other personal commitments. In addition, his positivity about life is infectious. Rather than feel sorry for himself and his history, he uses his positive energy to facilitate his future continued path to success. “I want to be a millionaire!” he says. 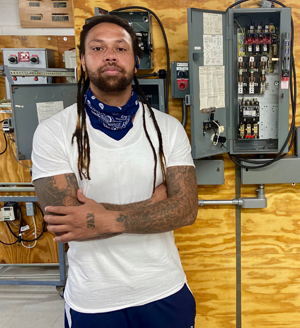 Wayne is proud of the fact that he’s landed on both feet. Considering where he came from and what he’s gone through, his grit and determination served him well. “Everything I’ve built and done has been all me. I didn’t have the family support growing up, but now I have my own family (married for 13 years and with four children) and they’re here for me. Likewise, I’m there for them and will support them in their education and dreams for the future.” Wayne feels fortunate to have found the Electrical Apprenticeship program, as it’s led to a solid career and network. He’s grateful for the support of the entire staff at the Electrical Apprenticeship program. “I give these people five stars! They’ve been with me through everything and supported me every step of the way.” His passion for the program and his role as an instructor has led to him helping to build the labs where students get hands-on classroom instruction.

The COVID pandemic has had a challenging impact on in-classroom instruction as students are currently receiving their instruction remotely. Wayne has worked hard to keep the students engaged. He knows the importance of keeping interest levels high without the benefit of in-person instruction. To that end, he tries to be as versatile as possible, adapting to the various needs and learning styles of his students. Says Wayne, “I’m learning as I’m teaching. As I encounter questions I may not know the answer to, I do my homework and get the answers for them. My job is to set these guys up for their second, third, and fourth years in the program—and I’m helping to set that foundation.”

Apprenticeship Training Director Ronn Blaney says, “The first time I met Wayne was when he applied to the program. He was so eager to turn his life around and start a new chapter. I’m proud to say that Wayne has not only accomplished this goal but exceeded it. Since his graduation from the apprenticeship program as a journeyperson electrician, Wayne’s become one of our instructors. He’s set another goal – to become a master electrician, and I’m sure with his determination and work ethic, he’ll succeed at that also.”

Wayne encourages anyone who’s interested in the trades to consider the electrical trade, one he considers critical to the functioning of every other trade. “It’s the lifeblood and source of power for everything on a construction site, not to mention for the world,” he says. Jobs are plentiful and the pay is attractive, particularly once the journeyperson certificate is earned.

His positions as an electrical journeyperson and instructor also enable him to do some of the other things he loves and is passionate about. He’s a budding entrepreneur with an endless list of ideas and he plans to do great things. He creates and sells website domains and is a passionate collector and trader of all things Batman; he’s hoping to create a business of selling on the Collector’s Fortune app.

A well-earned bright future is in the cards for Wayne, and he plans to take full advantage of all the opportunities that come his way.