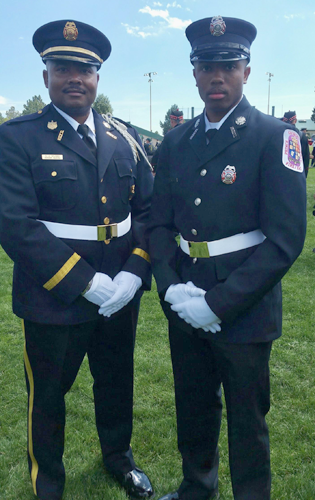 When you hear the word “Apprenticeship” you may think of electricians, plumbers, or one of many other highly skilled construction trades. What you may not think of is a United States Marine Corp Veteran and an Assistant Fire Chief.

However, that is exactly what you have in Assistant Fire Chief David Wilson. Chief Wilson didn’t start on the path to his working career with the goal of being a firefighter. Ironically, the path began while in high school in Detroit, Michigan where he studied plumbing. With many members of his family employed as plumbers the connection seemed logical and predetermined.

Fate had a different path in mind. Chief Wilson graduated high school and was also a highly skilled boxer with the possibility of a boxing career. The United States Marine Corp gave him the opportunity to box and so in 1993 he enlisted and began what would be nine years of service in our nation's military. The Marines took him from boxing to transportation and to his final job in the Nuclear, Chemical and Biological field. In 2002 Chief Wilson received an honorable discharge and settled down to begin his next career as a plumber.

Chief Wilson had never forgotten the lessons and advice given to him from other family members who had gone through plumbing apprenticeships. There would be a certification, license, and a lifetime career. Plumbers were always in demand and Chief Wilson headed down this path determined to emerge as a licensed plumber. Quickly accepted into the Washington D.C. Plumbing Joint Apprenticeship Committee with UA Local 5, he excelled and embraced the challenges. After four years of apprenticeship, he prepared to enter his fifth, and final, year of the apprenticeship when fate intervened again……

Chief Wilson not only has a family full of plumbers, but he also has a family with many firefighters. The Prince George’s County Fire and Emergency Services called right as he prepared to enter his last year of plumbing apprenticeship with an offer of a lifetime, to become a Registered Apprentice firefighter and to serve the citizens of Maryland and Prince Georges County once again.

Without looking back Chief Wilson leaped into the apprenticeship and excelled. In June of 2009, he graduated from his apprenticeship and hit the ground running. Seizing every opportunity to improve himself, and his ability to serve the community, he also went through Emergency Medical Technician Training (EMT) and obtained his Paramedic Certification allowing him to provide the highest level of care to those in need.

Chief Wilson rose quickly from the rank and file of the firefighter in 2009 to Lieutenant in 2013 and is now in his current position as Assistant Chief. Serving the community is in his blood and Chief Wilson credits the Marine Corp and Registered Apprenticeship, both as a plumber and firefighter, for helping him to get to where he is today. That passion was recognized by Governor Hogan who appointed him to the Maryland Apprenticeship and Training Council, where he still serves to this day.

That passion is carried over into his work life and his family life. Chief Wilson’s son, David Wilson II, entered the Prince George’s Fire apprenticeship as well and is a recent graduate of the 2019 class!

Chief Wilson - we thank you for your service to our county and state!